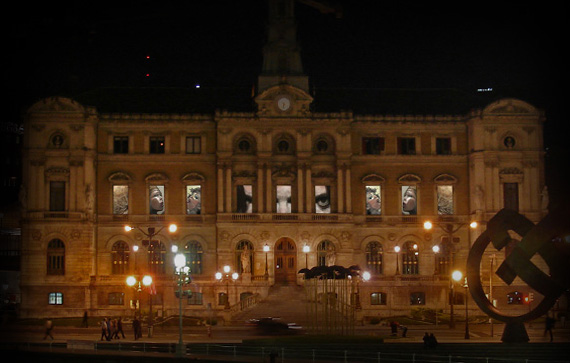 On Saturday 13th June, Bilbao celebrates its 709th anniversary and has decided to mark this event with a “NOCHE BLANCA” or “Sleepless Night”. The Bilbao 700 Foundation, which organises the Anniversary programme of commemorative acts every year, wanted to expand the scope of this event by organising a “Sleepless Night” in collaboration with Bilbao City Council and the city’s leading cultural agents.

Night Desire is an interpretation of the thrills and desires that accompany the experience of night life. During the festival NOCHE BLANCA Night Desire will be shown at the Bilbao City Council.
The video installation consists of projections on nine different windows and is to be viewed from the public space outside the building. The exterior of the building becomes the canvas where the individual projections form together a giant moving image of woman lasciviously licking the glass. Night Desire has already been showed at different city buildings in Europe as well as the CCCB in Barcelona.